All week the iPhone was saying shower's for Sunday, I was hoping that the phone would be wrong. Woke early, rushed outside and yippee blue sky, what does the iPhone know.

Got down to the Victoria hotel, sun shining and the clouds moving away. We were first, Paul and Sonya next, and then the bikes started to roll in with Brenton and Pete on their new toys, total 15 bikes, 3 Multistradas, 2 Bandits, 2 Harleys, 2 Spyders, the Crosstourer with the cool light's, the Green Machine, the boss' Vmax, the VFR, VTR and Battle Ship Galactica bringing up the rear. 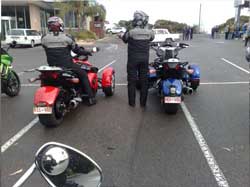 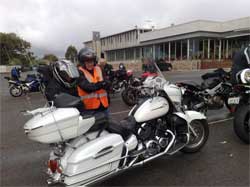 ith the weekend before being the long weekend, this gave me time to explore different routes, and I thought that the one I had worked out that would be good for this time of year, but with the roads being wet, I decided to cut a couple of sections out.

Briefing done and we are off, as soon as we left the showers started and it looked like it would never stop ( bloody iPhone always right), it was just enough to keep the roads wet and get the bikes dirty.

We arrived at Hahndorf with no incidents and not too wet, had a hot drink and a comfort stop and we were off again on the wet roads. On the Adelaide-Lobethal Rd there was a lot of oil on the road all the way to Lobethal, we were half expecting a broken down car or truck half way up the hill, so backing off a little we made it through the oil.

By the time we got to Tanunda we were three bikes down as they had enough of the wet roads and with more black clouds coming who would blame them. Everybody had an hour stop for lunch (expect the 2 Harley boys who needed longer), then as soon as we were getting ready to leave more showers appeared and two more decided it was time to go home.

The run to Sedan was nice and we stopped there for fuel, comfort stop and wait for the Harley boys to arrive. Off again to a shortened route to Lobethal and as soon as we hit the hills the showers started again, by the time we got to the Amberlight cafe in Lobethal we all had enough so it was hot chocolate for most. 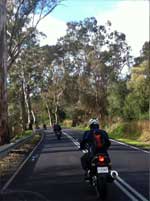 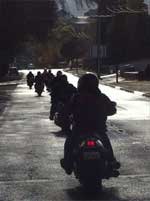 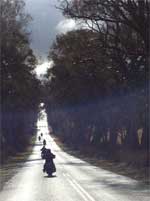 I would like to thank all that did come along to brave the conditions and sorry about having to clean your bikes, thanks Tony for being Tail End and thanks Sonya for the photos.

If you are reading this and have not yet been on a ride with the SABERS, come along and meet some fantastic people, never know you might enjoy it!
Tony Mace