Waking up this morning I didn’t know what to expect as I had been watching the weather radar all week on the B.O.M site to see what was going to happen. I also received a call from Brenton earlier regarding cancelling the ride but as it was only forecasting showers I decided that the ride would go on unless the forecast changed to rain. As it turned out the weather was great for a winter’s day with the sun out and no rain for the ride. 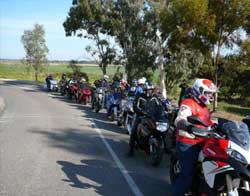 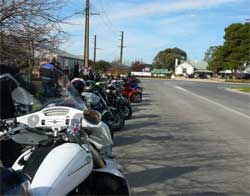 Every one found the meeting point o.k. as I was a bit worried about this new location. We left just after 10.00am and took in some of the well known and not so known roads around Iron Bank Bradbury, Mylor, Echunga, Mt Barker, Macclesfield and had a short rest stop at Langhorne Creek. From there it was out to Wellington along “cow pat alley” to Jervois. While waiting at the ferry I noticed the water level and couldn’t believe how high it was.

Lunch was at Tailem Bend where some opted to go to the local pub and others went to the bakery. It was such a nice day most of the group decided to stay outside to have lunch. After lunch the back road from Tailem Bend to Karoonda was taken to head back around to Murray Bridge where we stopped for fuel. We then headed over the bridge and found our way out to the Palmer road and continued onto Mount Torrens and then onto Balhannah to conclude the ride.

By then some of the group decided to head for home as others decided to stop there and have an afternoon coffee at the local café. 21 riders [inc. pillions] decided to brave the weather and come along on this ride. Being a Saturday it was a
great turnout.

I would like to thank those that took the time and came along and made the day enjoyable.
Chris.