What do you do when, as Sir Cliff says - you have a cassette in your pocket and you want to use it?  There is much to be said for the solitude inside a helmet, with the opportunity to observe and reflect.  There is also much to be said for a few tunes to keep us company on a long ride - and any ride out from Adelaide has the potential to get long. 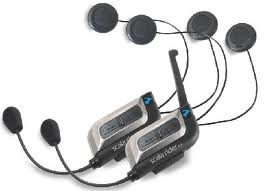 Most of us have tried all the obvious solutions.  Earphones and Headphones don't work with a helmet that's firm and even then they fall out of place into the most annoying position they can find, only to prematurely end their life by finally being ripped apart on some part of the bike superstructure.  Speakers dismantled, reassembled and recessed into a helmet (good luck with that) never sound as good as they should and without a booster amp become useless at speed.  I have a helmet with the holes already dug if you'd like to try for yourself.  Fitting external speakers to anything smaller than Goldwing is not only a travesty of style, it fails to work very well either.

The whole point is to hear other riders or to listen to tunes, the original mono intercoms that I've used were great for talking to other people but would never have carried a tune.  The G4 is in a whole other league - clear audio even at speed.  Clear enough for a fussy audiophile, indeed on some occasions even clearer than my BOSE earphones.  This is clearly a system that has been designed from the start to fit inside motorcycle helmets, it seems to use the acoustics (?) of the helmet rather than fight it.

The thing I find remarkable is that this system works even at speed - no, I'll not tell you which speed, but if you are still listening, the tunes will be there.  Firstly the audio is good to start with, Secondly the unit has an accelerometer that adjusts the volume for the speed you are travelling.  This system is not completely foolproof, hard acceleration or deceleration will cause sharp adjustments in volume.  Overall though this system is well worth the extra money I'm sure it cost, certainly better than fumbling under your jacket for a tiny volume control before turning it the wrong way (eyes watering with the ear splitting pain).

I hate wires, string, cables anything on the bike or on me.  I am fanatical about this, which goes a long way to understanding why I am so excited about the the ability to stream music wirelessly from my phone and iPod.  The G4 goes even further and lets you control your music device from the headset.  Play, Stop, Fast-Forward, Rewind - Sir Cliff would be beside himself.  The G4 also has a cable input if you want to use a non-Bluetooth device, although you will not have same control.

Does the G4 work with Apple's assistant, Siri?  Sometimes.  In fairness the problem for me is not with Siri or the G4 .... My helmet is quite firm, so my voice sounds different with my cheeks compressed.  That said, I have successfully made notes, reminders and made calls using Siri.  So I'm reserved on my ability to use Siri whilst riding, but I'm not on the bike to conduct business - I go to work for that. 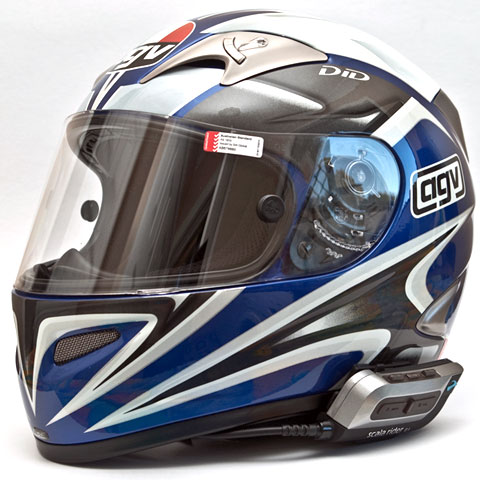 I've now had the G4 for six months and it is wonderful!  I use it primarily for streaming audio via Bluetooth from my phone or making phone calls.  It is an expensive way to get music while I ride, but having tried almost every other option over the years it is nice to find something that works.  I've not said much about the intercom functions as I've not used them much.  On the couple of occasions I have talked to people it has been fine, including connecting to other brands of communicator.  Stereo,out on the street you know :-)